A novel discovery of SUMOylation in mediating lymphatic metastasis of bladder cancer from the research team of Prof. Tianxin Lin and Prof. Jian Huang

BCa is one of the most prevalent malignancy in the genitourinary system and is the second main reason of urinary cancer-related death worldwide. Lymph node (LN) metastasis is considered as the main metastasis route and the leading cause of poor prognosis for BCa, which decreases the 5-year survival rate of patients from 77.6% to 18.6%. Therefore, fully determining the molecular mechanism triggering LN metastasis of BCa is of great clinical importance for the treatment of patients with BCa.

Prof. Tianxin Lin’ research team previously demonstrated that BCa cell-secreted EVs served as molecular cargo carriers to regulate intercellular communication between tumor cells and tumor microenvironment, resulting in the lymphangiogenesis of BCa (J Clin Invest, 2020). However, further study indicated that the lncRNA cargo contained in EVs are significantly different with that in their original cells, suggesting that lncRNA is specifically packaged into EVs, but the underlying mechanism remains unknown. 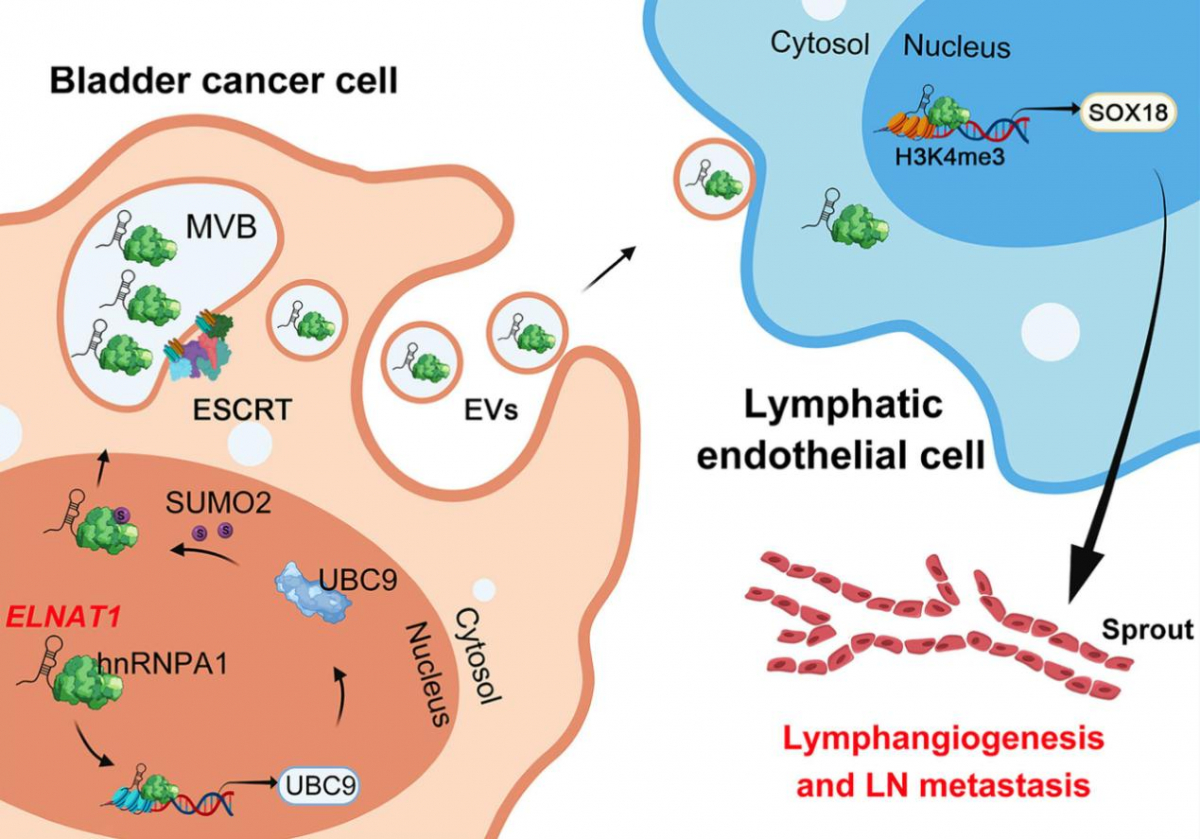 lncRNA-ELNAT1 regulated the SUMOylation of hnRNPA1 and mediated the ESCRT-dependent packaging of EVs, promoting the lymphatic metastasis of BCa.

In the present study, Prof. Tianxin Lin’ team identified a novel lncRNA ELNAT1, which was significantly overexpressed in BCa cell-secreted EVs and correlated with the lymphatic metastasis of BCa. Mechanistically, ELNAT1 induced UBC9 overexpression to catalyze the SUMOylation of hnRNPA1 at lysine-113 residue, which mediated the recognition of ELNAT1 by endosomal sorting complex required for transport (ESCRT) and facilitated their packaging into EVs. EV-mediated ELNAT1 was specifically transmitted into HLECs and epigenetically activated SOX18 transcription to enhance lymphangiogenesis and lymphatic metastasis of BCa. These findings highlight a novel mechanism that EV-mediated ELNAT1 promotes the lymphangiogenesis and LN metastasis of BCa in a SUMOylation-dependent manner, and implicate ELNAT1 as an attractive therapeutic target for LN metastatic BCa.